We can exclusively reveal today that one of Lewis Smith & Co’s directors will be playing live on stage at the “Party in the Park” festival at Mary Stevens Park, Stourbridge on Saturday 22nd May 2010. 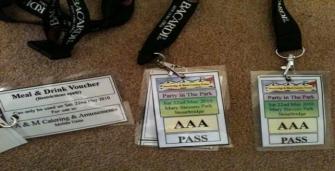 But which of them will it be?

The smart money was initially on Craig Beale, whose swarthy good looks, high living antics and support for West Bromwich Albion football club seemed to be the perfect credentials for the role of a rock legend. Much to everybody’s surprise, however, our resident rock god can be revealed as none other than Andrew Smith!

Lewis Smith & Co. client Gareth Edwards, of Arrowsmith Marketing, had this comment. “When I heard the news that Andrew would be using a Gibson Les Paul to blast rock songs at hundreds of unsuspecting folk at the festival I was dumbstruck. As far as I was concerned he wasn’t into music at all just Phil Collins, Chris de Burgh and Coldplay. I didn’t know that he even had a guitar.”

In fact Andrew is a member of Stourbridge garage band “MaDads” who have been playing on the underground circuit in the Black Country for some years. Despite never having met other local luminaries such as Robert Plant, Rob Halford or Noddy Holder the band see themselves as the successors to a long standing dynasty. MaDads are a serious band with serious intentions though. Their original material includes the song “Tarka Daal” (YouTube link opens in new window, reduce volume now), which some critics (although not many) have seen as an insight into social and political unrest in the 21st Century. Most people think it is a song about curry.

Andrew is delighted that the secret is now out and the band is making a big public statement. “It took a lot of negotiations with the festival organisers by our agent and our lawyers to get this gig. We have been playing a lot of smaller venues to get up close and personal with our fans. My house, Mark’s house, Ian’s house and Kerry’s house (when she is allowed). This is the springboard we need to get major media coverage….it’s just a shame that we couldn’t have gone onstage before Mr. Tumble though.”

MaDads will be blowing the crowd away from 3.15 (in the afternoon). Be there or be square.

Andrew Smith will be resuming normal service on Monday 24th May at 9.00am