Our very own Craig Beale stormed the Great Midlands Fun Run to raise money for The Friends of Alfie Johnson. 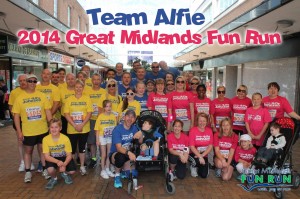 Although Craig won’t reveal the actual time that it took to complete the gruelling 8.5 mile course he assures us that it was “definitely less than 2 hours”.

Craig was at great pains to point out that his fellow director, Andrew Smith, hadn’t taken part this year claiming a sports injury. Reports that this involved hurting his wrist while lifting a can of beer in front of the football are deeply unfair, according to Andrew, who says it was “more likely to have been from pouring a glass of wine”.

More importantly Craig was part of a team who managed to raise an excellent £464 for the charity.  The Friends of Alfie Johnson take their inspiration from Alfie Johnson himself, a little boy who suffered brain damage at birth and now needs constant care and attention.  In fact the charity now raises money for to help many disabled children, which makes it a very deserving cause.

If you want to support Alfie then why not book seats or even an entire table at The Friends of Alfie Johnson Summer Ball 2014. It’s being held at the Copthorne Hotel at Merry Hill on July 5th and promises to be bigger and better than ever. Email the organisers at info@friendsofalfiejohnson.org.uk for more details.